Pierre Haren is a graduate of Ecole Polytechnique in France, and holds MS and PhD degrees from MIT. He led a research team at INRIA on the design of expert systems in the 1980s. He created ILOG in 1987, took it public in 1997 and led its sale to IBM in 2008. He subsequently joined GBS, the consulting arm of IBM where he served for two years as VP of Advanced Analytics and Cognitive. After leaving GBS, Pierre co-founded Causality Link.

Throughout his career, Pierre has led diverse teams of researchers, developers and consultants. He has brought several industry-leading products and technologies to market, including expert systems, advanced GUIs, and operations research, as well as Watson technologies during his tenure with IBM. He is passionate about Explicit Artificial Intelligence at the convergence of knowledge engineering and advanced software, where knowledge representations can be understood by experts and leveraged by computers.

View the complete product demo in the KGC media library.

2019 Talk: From Conceptual Graphs to Causal Graphs: a perspective on the reasoning power of Knowledge Graphs

A key element of AI is the ability to reason on reasoning. General AI will only be achieved when this capability becomes recursively unlimited. However, this capability is not possible with processes as black boxes. The more reasoning processes rely on the data-driven manipulation of explicit meaningful data, the closer we get to the ability of meta-level reasoning. The evolution of knowledge graphs can be understood through this prism, as the reification of higher levels of symbolic reasoning across time. From Sowas conceptual graphs to frames, then prototypes, then object-oriented rule-based or constraint programming, modern knowledge graphs and now causal graphs, we will highlight how the reification of increasingly complex levels of reasoning into data enables us to get incrementally closer to the target of reasoning on reasoning, and how this progress increases our ability to extract knowledge from experts and merge these knowledge pieces into increasingly powerful systems. 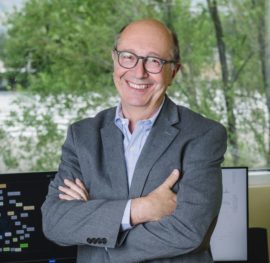