Dr. Chaitanya Baru is Senior Science Advisor in the Convergence Accelerator Office. He is there on assignment from the San Diego Supercomputer Center (SDSC), University of California, San Diego. He previously served at NSF, from August 2014-2018, as Senior Advisor for Data Science in the Computer and Information Science and Engineering Directorate. During that time, he co-chaired the NSF Harnessing the Data Revolution Big Idea (HDR) and also played a leadership role in the NSF BIGDATA program, where he was instrumental in establishing a partnership between NSF and the four major public cloud providers, viz, AWS, Google, Microsoft Azure, and IBM. He helped initiate the HDR Data Science Corps program, was an advisor to the NSF Big Data Regional Innovations Hubs and TRIPODS programs, and supported a series of workshops on Translational Data Science. He has served as co-chair of the NIST Public Working Group on Big Data and is currently co-chair of the Federal NITRD Big Data Interagency Working Group (BDIWG). He was a lead organizer of the NITRD BDIWG workshop on Open Knowledge Network, which led to establishment of Track A in the Convergence Accelerator on Open Knowledge Network (OKN).
Dr. Baru has worked on translational and applied research in computer science and data science at SDSC since 1996, where he has served in a number of leadership positions. One of his research projects on big data benchmarking engaged a group of industry partners and helped establish industry’s first benchmark standard for big data, viz., TPCx-BB. He has worked previously at IBM, on the DB2 Parallel Edition development team, and has been a faculty member in the EECS Department at the University of Michigan, Ann Arbor. He has an ME and PhD in Electrical Engineering (Computer Engineering) from the University of Florida and a BTech in Electronics Engineering from the Indian Institute of Technology, Madras.

The concept of an Open Knowledge Network (OKN) is one of the components of the National Science Foundation’s Harnessing the Data Revolution (HDR) Big Idea, with the objective of providing semantic information infrastructure. By encoding information and knowledge about real-world entities and their relationships, the OKN would enable next generation artificial intelligence-based technologies and applications, focusing in particular on science and engineering information. While large-scale knowledge networks have been deployed in services like Google Search, Amazon catalogs, Apple Siri, Microsoft Cortana, and WolframAlpha, an open effort would expand this approach, enabling discovery of non-trivial information from multiple disparate knowledge sources for thousands of new topic areas in scientific and engineering information.

With this objective in mind, the NSF Convergence Accelerator announced a “track” on the Open Knowledge Network (Track A) in 2019. Twenty-one projects were funded in Phase I in 2019 and five were funded in Phase II in 2020. Multidisciplinary, multi-sector teams in these projects are addressing a range of issues including, programming environments for knowledge network creation, making hidden/implied geospatial information explicit in knowledge graphs, and encoding information in specific domains, viz. urban flooding, biomedicine, and court records.

This talk will provide an overview of the NSF Convergence Accelerator program and the Open Knowledge Network activities. 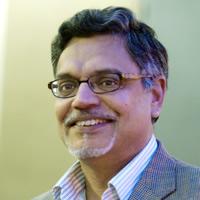